In Seattle, Washington, the cops don’t play.  Or discriminate.  In a peaceful march downtown for the Occupy movement today, police decided that the crowd absolutely had to be dispersed.  And they weren’t playing favorites when they decided to use the pepper spray liberally in discouraging the crowd.  Among the victims:  84-year-old longtime activist Dorli Rainey.  After receiving a face full of pepper spray, Ms. Rainey was rushed to the hospital by her fellow protesters.  A two-month pregnant 19-year-old woman who only revealed her name as Jennifer was also among the victims who were rushed to the hospital.  And, if that isn’t enough of a sampling of the kind of lowlifes we had here, another was a priest.

Don’t worry, though, my good friends.  A spokesperson for the Seattle police was quick to explain that this was for the victim’s own good.  Never mind they were protesting peacefully and legally.  That’s beside the point.  After all, there’s nothing better on a nice autumn night than a face full of pepper spray.  Jeff Kappel of the Seattle police, upon being asked about the Rainey incident, quickly explained that pepper spray is not age specific.  “No more dangerous to someone who is 10 or someone who is 80,” Kappel said to a room of wide-open gaping mouths.  He also added, much to everyone’s relief, that Seattle police “probably wouldn’t be using pepper spray if that was the case.”  Nice to know.

On the Seattle Police blog, Kappel elaborated on things further.  According to him, pepper spray is only used when things go awry.  “Pepper spray was deployed only against subjects who

were either refusing a lawful order to disperse or engaging in assaultive behavior toward officers,” Kappel said.  No word on what 4 foot 10 inch, 84-year-old Dorli Rainey was doing that was “assaultive” to the officers.

At least there will be no complaints of discrimination here.  What’s good for Grandma is good for the young’uns too.  Actually, maybe there will be complaints.  There are absolutely no reports so far of any African-Americans being pepper sprayed in the protest march.  A clearer application of the race card we have never seen.

The satirical French magazine Charlie Hebdo touched a nerve with extreme Muslims after it announced that the prophet Muhammad, always a controversial figure, would be a “guest editor” for the magazine.  It even went as far as to hype the event by renaming the magazine “Charia Hebdo,” a play on the sharia law.  They knew they might turn some heads, but it was just another day for the magazine that lives and dies on the “controversy creates cash” mantra.  However, they were not ready for what would happen next.  Staff for the magazine found their offices in ruins after Islamic militants firebombed it.

You might think that staff at Charlie Hebdo might have learned their lesson on inciting the Muslim public.  However, not ones to back down in the face of a crisis, they have now replied to the attack with an even more inflammatory (pardon the pun) magazine cover.  It  features a gay Muslim man kissing another man with the inscription “L’Amour plus fort que la haine” below.  If you forgot your high school French, that is “love is stronger than hate” in English.  The cover is being frequently referred to as “Gay Muhammud” in the media.  No doubt, this will not help appease the Muslim population.

So, what’s the moral of the story here?  Poke fun at the prophet Muhammud…get bombed.  Simple enough.

Common Sense Conspiracy does not advocate irreverence toward the figures of any religion, be it Muhammud or Jesus Christ or any other.  Hopefully, this disclaimer will be enough to keep the Muslims from firebombing the one-room aluminum shed leeching Internet and power off of unsuspecting neighbors that Common Sense Conspiracy is run out of.  Please donate to our Muslim Defense Fund.

This past week, the news has been dominated by two stories, both involving sex crimes.  Republican presidential candidate Herman Cain was flying high in his bid for the Republican nomination when claims of sexual harassment in his past started to surface.  Despite his vehement denials, more and more women are now coming forward saying that they, too, were sexually harassed by Cain.  On the other side, Penn State came under universal fire as details of child molestation by assistant coach Jerry Sandusky were found to be mostly ignored for years, leading ultimately to the firing of legendary head coach Joe Paterno.  The question here is why do these things stay under wraps for years before they surface, and why now?

It should be recognized that Common Sense Conspiracy does not advocate sexual harassment in any form, and we completely condemn sex crimes against children.  However, we do wonder how it is possible for these things to be overlooked for years at a time.  In the case of Cain, there seems to be some more sense to it.  A lot of these women that Herman Cain allegedly harassed sexually probably never expected him to become a presidential candidate.  In his days as the CEO of Little Caesar’s pizza corporation, it would have been hard to connect the dots between Cain and a future serious candidate for president.  Still, one has to wonder why these women were silent all these years.  Why now?  For attention?  For potential monetary gain?  Or just to derail his nomination attempts?

Powerful people exert a lot of influence in our world, and while sites like ours spend a lot of time analyzing organizations like Bilderberg, world governments, and world leaders and the power that they wield, power is a relative 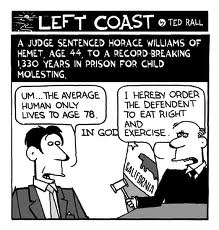 term.  The local councilman, president of the university, or your boss may be just as powerful on the playing field the average person is playing on.  Do they think they just can’t win?  No one will believe them?

In the case of the Penn State scandal, there arises the huge moral question of how much is enough in situations like this.  If you witness a person molesting a child, is it your duty to follow the protocol set before you, or is it your duty to stop it?  Is it your duty to report it to the police or to leave that up to higher powers?  Are there crimes where the reputation of institutions and companies go out the window in favor of good, old-fashioned ethical behavior?

As Herman Cain’s political star diminishes and Joe Paterno’s record-breaking career heads into twilight, what does it really all mean for us?  That is the question that we are asking in the poll below.

In light of the recent backlash rapper Soulja Boy encountered after allowing a song to leak on the Internet that featured some less-than-flattering lyrics about the United States Armed Forces, we at Common Sense Conspiracy feel moved to comment on the relationship between what this site, and others like it, is all about and the men and women of the military going about their dangerous business each day overseas. Granted, it’s hard for a reasonable person to really get behind what Soulja Boy had to say in the song “Let’s Be Real.” After all, lines like “F–k all the Army troops/b**tch, be your own man” are somewhat indefensible. After hearing from a few real soulja’s that were not impressed, Soulja Boy subsequently issued an apology that seemed genuine enough. He invoked his frustration with the wars we’ve been fighting as the inspiration for his lyrical tirade and said that he never meant to insult the troops. Okay, so looking at the lyrics above, it’s a hard sell, but at least the man had enough decency to apologize.

So what does this have to do with Common Sense Conspiracy, you say? Nothing especially, but it brings to mind a point that needs to be made as we continue to delve more and more into some of the popular, and not so popular, conspiracy theories being tossed around the web right now. Let’s face the facts; government and conspiracy go hand-in-hand. Many of the theories we will be examining here involve the government having sinister intentions for their operations, covering up the truth, and trying to promote a new social order which promises “freedom” while supplanting it with “control.” The wars in Iraq and Afghanistan and now the ongoing situation in Libya as well are thought by many to have been manufactured by our government for different reasons. These kinds of sentiments are nothing new in American history; conspiracy theories can be traced back all the way to the Civil War right up to present day.

The point we want to make here is simple. We believe that the American people have every right to have a problem with what their government is doing. That right is kind of what the whole country was based on originally anyhow. We also believe that there is not only a right, but a need for Americans to investigate, dig deeper, and seek the truth about what is happening in the world around them. However, we want to make it abundantly clear to our readers that Common Sense Conspiracy may have issues with the wars that our country has found itself in, but we never for one second waver in our support of our troops. Whatever our convictions about the reasons for war and military action, our troops are there in our stead, representing not only our government but each and every one of us, and the dangers they face day-to-day are, for most of us, unimaginable. So, let’s all remember that our American soldiers theoretically fight so that we can discuss these very issues in peace, and we must never forget them.

For the record, another lyric in the song “Let’s Be Real” goes: “F–k the FBI.”

Thanks Soulja Boy. That’s one we can live with.