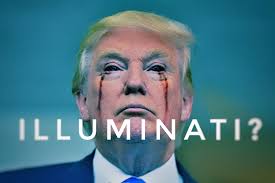 Well perhaps it is a little late to be asking this question, but still, it needs to be addressed.  Is Donald Trump Illuminati?  Yes, that Donald Trump, the one that has managed in some unorthodox way to rise to the level of President of the United States of America.  Let’s examine this from every angle and see if we can find the truth.

Donald Trump was always basking in the glory of any kind of fame he could come across.  Despite having a pretty substantial starting fund from his father, Donald has done a pretty good job of fooling the public into thinking he built his fortune for himself.   A shocking number of people have no idea that the Donald actually started his lucrative career with almost a half a billion dollars.  As anyone in the biz knows, it takes money to make money, and it’s really hard to make a fortune like Donald has without a pretty good amount to start on.  Donald had the money to take some risks and weather them.  Most folks starting out don’t have such luxuries.

Before Donald Trump’s extremely improbably presidential bid, he was a reality television star.  The Apprentice worked, however, on his reputation.  The idea was that he was to The Apprentice what someone like Keith Urban should be to American Idol.  He was an authority on business, and that made his show successful.  It took a mogul to make that model work, and Trump did.  He is still riding that success today.

So, on our Illuminati checklist, let’s ask ourselves the magic question.  Did Donald Trump have the kind of reach in the world to entertain an Illuminati invitation?  Well, the answer to this one is 100% yes.

Why would the Illuminati be interested in Donald Trump?  First of all, money.  The Illuminati likes money and likes the power that it brings.  Trump would not be the first time that the Illuminati backed someone just because of financial resources.   Secondly, Trump has reached a lot of people, and never more than what he has done after his triumphant presidential win over Hillary Clinton.  Trump’s Twitter account is legendary, even if the company Twitter rues the day it let him have one.  He has huge influence and huge outreach.  However, the Illuminati is more of a stickler for getting people before they accomplish such things.  Donald Trump is very, very attractive to the Illuminati in his current position, but did he really strike them as having that kind of influence before?

The Proof is in What Happens

Is Trump Illuminati now?  Well, they would love to get hold of him, but his actions seem to indicate otherwise.  Whether you love or hate the man, he does seem to be bucking the system every chance he gets, and the Illuminati is up to its neck in that system.  If the Illuminati didn’t have its clutches in Trump before the presidency, you can bet they are doing everything they can to destroy him now.  And if you look around our current political climate, that doesn’t seem like such a sensational accusation.

If Trump lives out his days, you can bet he was never an Illuminati target for real.  Maybe they never took him serious.  Believe you me, the Illuminati does not consider being President of the United States to be as important or influential as perhaps you or I do.  The Illuminati has long understood the way the real world works, and they would much rather get their clutches in Kanye West, Taylor Swift, or Jay-Z than someone like Donald Trump.  But his following in political circles certainly raises an eyelid, if not an all-seeing eye one.

So Is He Illuminati or Not?

Well there is no way to no for sure, but here at Common Sense Conspiracy, we tend to lean toward Donald Trump not being part of the Illuminati.   Not because he wouldn’t gladly join, but because we don’t think they would invite him.  If they ever did invite him to become an Illuminati member, we feel like it would only be because of where he is now and not what he was before the fascinating spectacle that was the 2016 Presidential Election.   And with an ego like Donald Trump, it’s possible that he would give them the finger at this point.  Of course, that could have significant repercussions.  The Illuminati is pretty nasty if you make them mad, but Donald Trump may have the only fortress in the world able to survive an Illuminati sacrifice pronouncement.  We may never know the answer, but stay tuned.

One thought on “Is Donald Trump Illuminati?”