A major news story of last week was that the United States had thwarted an Iran-backed plot to assassinate Saudi Arabia’s ambassador to the United States.  This story was, of course, released by the United States, no doubt with the intention of increasing tensions between these two nations.  It also has the secondary effect of bolstering the government’s case for an eventual invasion of Iran, something that has been seemingly in the works for several years now.  A third effect is the setting off of Common Sense Conspiracy’s patented “Propaganda Alarm,” something we have not sounded in our early days of inception until today.

To explain what we refer to as propaganda, we start with a simple, everyday dictionary definition of the word:

prop·a·gan·da  –  Noun –  1.  Information, especially of a biased or misleading nature, used to promote or publicize a particular political cause or point of view.

2.  The dissemination of such information as a political strategy. 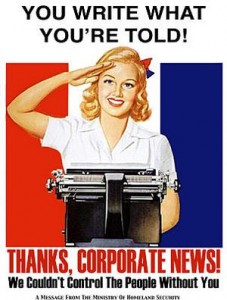 Pretty much sums it up, doesn’t it?  An even simpler way of explaining propaganda is a manipulation of public opinion.  While not everything is necessarily propaganda, a look back in history can show how the propaganda machine that is the media can bolster or detract support from different ideas and movements.  For example, up until the tragic events of Pearl Harbor, the United States public opinion was to stay out of the affair altogether.  It was across the ocean and there seemed little to be gained from engaging in the worldwide conflict for the average American.  Thousands of lives would be lost, and in fact, the military at that time was not the juggernaut it is today.  They were ill-prepared for an all-out conflict in comparison to the war machines of Germany and Japan.  After Pearl Harbor, the nation banded together to beef up the military, both in terms of recruits and equipment.  The efforts led not only to the eventual defeat of the Axis forces, but also to the rise of the United States of America as an international superpower.

Another example is the Vietnam War.  Propaganda was used to encourage Americans to think that any nation that did not subscribe to democracy was a threat to ours.  This theme in the propaganda machine endures even today, with George W. Bush busily portraying the invasion of Iraq as not only a search for weapons of mass destruction, but also a noble mission to bring democracy to the nation and region.  We are made to interpret the United States as a champion of peace, pushing these nations governed by evil dictators to gain freedom.  The truth is, a lot of these countries may have had dictators that didn’t always have the people’s well-being first in mind, but that doesn’t mean that the people necessarily want a political system like ours.  Propaganda shapes our lives; we are made to believe that we are the white knights busting into these countries to save the day and bring freedom to the masses.  A quick look around the world’s opinion of the United States will show you that internationally, we are perceived much differently.  This, too, is nothing new.  Reading the textbooks about our history, we are led to believe that the United States was regarded as some kind of superhero around the world after we joined the Allies and defeated Germany and Japan.  Once again, reality is much different.  As a matter of fact, there was such anti-American sentiment in the years following World War II that the infamous Bilderberg group was formed to try to clean up America’s image.  The propaganda machine is not just the media; we see it in our children’s textbooks, shaping the outlook of the next generation.  Remember the Cold War?  Every little kid playing in the yard in America thought the Russians were the devil incarnate.

In the days and weeks leading up to the Iraqi invasion, the media was busy propagating the fear that Saddam Hussein was sitting on a stockpile of nuclear weapons that would soon be unleashed if he was left unchecked.  This became the battle cry for the entire movement.  It also shows the multiple levels of the hierarchy of our government and the propaganda that precedes its goals.  President George W. Bush bore the brunt of the criticism for the Iraq invasion and the fact that these suspected weapons were never found.  But at the end of the day, Bush didn’t decide to invade Iraq based on his own intuition.  The CIA was in his ear, imploring him that now was the time to act.  There’s no doubt that Bush thought there was enough intelligence gathered that it was a slam dunk, and at the end of the invasion, not only would an evil dictator be eradicated, but these weapons would be taken out of circulation.  The “spread of democracy” was a just a nice Christmas bow to put on top of the gift box.

The point:  the propaganda doesn’t just stop at you and I.  Even the President of the United States can be a victim of it.  Bush was at their mercy, to act on the information they gave him.  Because it was decided by someone,

some entity, that that was what was to happen next.  It’s not as simple as just dictatorially deciding the course of action; these entities, who have no name, at least not that we will ever know, do not seek to merely control the next moves, but to sell it to us.  Like a bowl of milk for us to lap up like a cat.  We aren’t just supposed to go along with it…we are supposed to want to.  To support it wholeheartedly.  To be willing to throw our own lives away to advance it, if necessary.

Is the assassination plot revealed an act of propaganda, or a true revelation of a well-executed operation by our government and military?  The bottom line is, like with most conspiracy theories, we will never have a way to know for sure.  What we can do is to be aware of the nature of the propaganda machine, and to take what we see with the proverbial grain of salt, always reading between the lines, looking for truth.